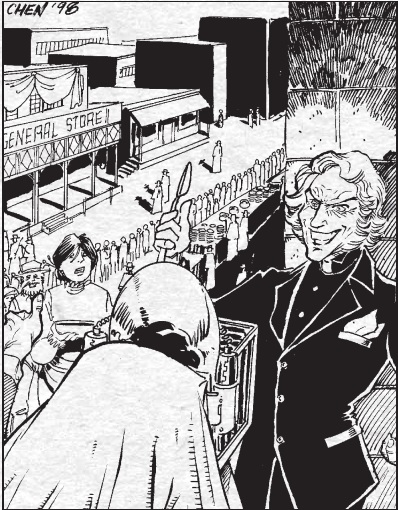 Reverend Ezekiah Grimme is the founder of both the Church of Lost Angels and the City of Lost Angels, and the self proclaimed theocratic ruler of California and the right hand of God himself. His origins are mostly unknown, he only came into the eyes of the world after the Great Quake when he led his followers out of the maze, and built a city on one of the chunks of worthwhile land left over afterwards.

Back east, he's widely regarded to be a corrupt minister, who uses his hold over his followers to enrichen himself and live a life of luxury at their expense. His followers believe him to be blessed by God, given the sheer quantity of food that he provides them with; only asking that they worship at his church in return. Everybody in California has to deal with him and his followers in one way or another, regardless of what they think of him. Blessed by God or not, he's got a fanatical army of followers who are just too well armed to ignore.