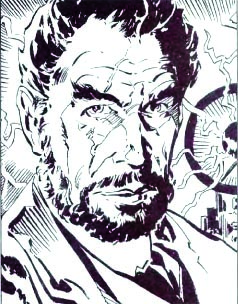 Dr Darius Hellstromme, a British born intellectual, is widely regarded as the most preeminent New Scientist of the era. While he did not discover Ghost Rock, he has made more advances in understanding it and its usages than any other scientist on the face of the earth.

He is the head of Hellstromme Industries, which is based out of the City o Gloom in Desert, and a fierce competitors with Smith and Robards. He also founded Wasatch rail lines and threw his top hat in the ring in an attempt to construct the first trans-continental railroad, and thus win the contracts being offered by the Union and Confederate governments.

It was widely believed that he had dropped out of the race a year ago when he and his rail crew vanished in the mountains west of Desert, but recent events revealed that he had actually been constructing the longest rail tunnel on the planet to avoid the obstructions on the surface.